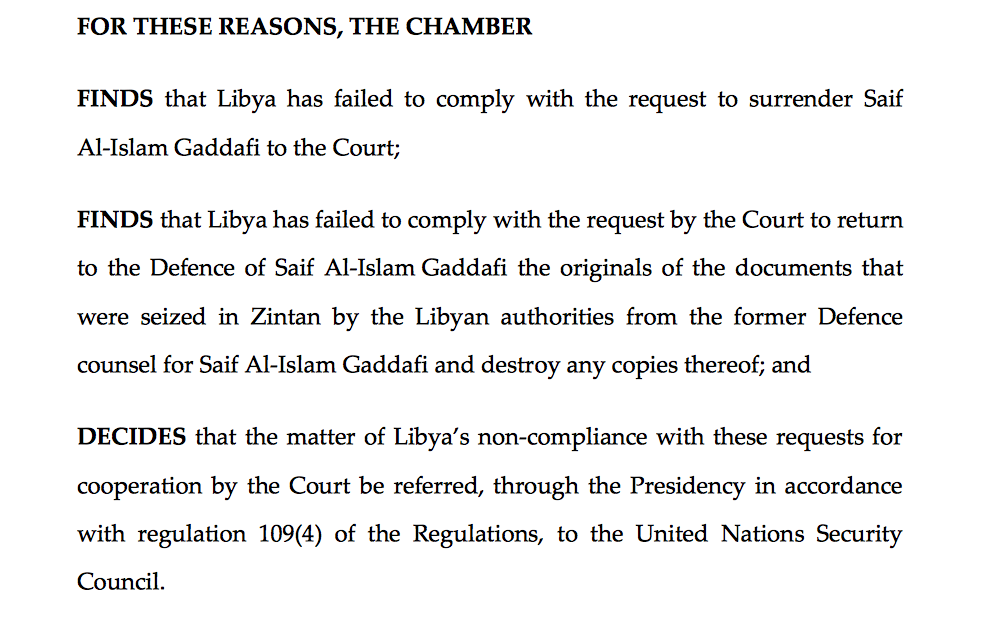 ​ Today, 10 December 2014, Pre-Trial Chamber I of the International Criminal Court (ICC) issued a finding of non-compliance by the Government of Libya with respect to the non-execution of two requests for cooperation transmitted by the ICC, and decided to refer the matter to the Security Council of the United Nations.

The Chamber found that Libya has failed to comply with the requests by the Court: (i) to surrender Saif Al‑Islam Gaddafi to the Court; and (ii) to return to the Defence of Saif Al-Islam Gaddafi the originals of the documents that were seized by the Libyan authorities from the former Defence counsel for Saif Al-Islam Gaddafi in June 2012 in Zintan, and to destroy any copies thereof.

The Chamber stressed that both outstanding obligations are of paramount importance for the exercise by the Court of its functions and powers under the Rome Statute and that the non‑compliance by Libya effectively prevents the Court from fulfilling its mandate, including its duty to protect the rights of the parties and the interests of victims.

The Chamber recognised that throughout the proceedings, Libya demonstrated in several respects its commitment to the Court and made genuine efforts to maintain a constructive dialogue. The Chamber also noted the volatile political and security situation in Libya and stated that it was sensitive to the serious difficulties that Libya is currently facing.

The Chamber emphasized that its decision was only based on the objective failure to obtain cooperation. It was not intended to sanction or criticize Libya but solely to seek the assistance of the Security Council to eliminate the impediments to cooperation.

Background: The situation in Libya was referred to the ICC Prosecutor by the United Nations Security Council in its resolution 1970. On 3 March 2011, the Prosecutor announced his decision to open an investigation in the situation in Libya, which was assigned by the Presidency to Pre-Trial Chamber I. On 27 June 2011, Pre-Trial Chamber I issued three warrants of arrest respectively for Muammar Mohammed Abu Minyar Gaddafi, Saif Al-Islam Gaddafi and Abdullah Al-Senussi for crimes against humanity (murder and persecution) allegedly committed across Libya from 15 until at least 28 February 2011, through the State apparatus and Security Forces. On 22 November 2011, Pre-Trial Chamber I formally terminated the case against Muammar Gaddafi due to his death. Saif Al-Islam Gaddafi and Abdullah Al-Senussi are not in the custody of the Court.

On 31 May 2013, Pre-Trial Chamber I rejected Libya’s challenge to the admissibility of the case against Saif Al Islam Gaddafi and reminded Libya of its obligation to surrender the suspect to the Court. On 21 May 2014, the Appeals Chamber confirmed Pre-Trial Chamber I’s decision.

On 11 October 2013, Pre-Trial Chamber I decided that the case against Abdullah Al-Senussi is inadmissible before the ICC as it was currently subject to domestic proceedings conducted by the Libyan competent authorities and that Libya is willing and able genuinely to carry out such investigation. On 24 July 2014, the Appeals Chamber confirmed Pre-Trial Chamber I’s decision.

Further information on this case is available here.