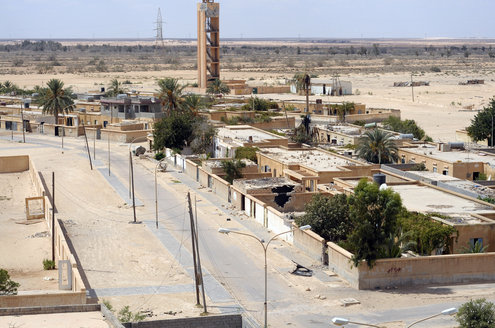 Tawergha used to be a city filled with black non-Arab Libyans. Rebel forces emptied the town after they seized Tripoli and residents have yet to return. | David Enders / MCT

TAWERGHA, Libya — This town was once home to thousands of mostly black non-Arab residents. Now, the only manmade sound is a generator that powers a small militia checkpoint, where rebels say the town is a “closed military area.”

What happened to the residents of Tawergha appears to be another sign that despite the rebel leadership’s pledges that they’ll exact no revenge on supporters of deposed dictator Moammar Gadhafi, Libya’s new rulers often are dealing harshly with the country’s black residents.

According to Tawergha residents, rebel soldiers from Misrata forced them from their homes on Aug. 15 when they took control of the town. The residents were then apparently driven out of a pair of refugee camps in Tripoli over this past weekend.

“The Misrata people are still looking for black people,” said Hassan, a Tawergha resident who’s now sheltering in a third camp in Janzour, six miles east of Tripoli. “One of the men who came to this camp told me my brother was killed yesterday by the revolutionaries.”

On Tuesday, Amnesty International issued a report on human rights issues in Libya that included claims that the rebels had abused prisoners, conducted revenge killings and removed pro-Gadhafi fighters from hospitals.

Dalia Eltahawy, an Amnesty researcher, said the Tawerghis “are certainly a very vulnerable group and need to be protected.” She called on the rebel leadership to “investigate and bring people to justice” for those abuses “to avoid a culture of impunity.”

But rebel leaders, in their response, made no mention of Tawergha, though they promised to “move quickly … to make sure similar abuses are avoided in areas of continued conflict such as Bani Walid and Sirte.”

“While the Amnesty report is overwhelmingly filled with the horrific abuses and killings by the Gadhafi regime, there are a small number of incidents involving those opposed to Gadhafi,” the rebels’ ruling National Transitional Council said in a statement. “The NTC strongly condemns any abuses perpetrated by either side.”

There’s no doubt that until last month, Tawergha was used by Gadhafi forces as a base from which to fire artillery into Misrata, which lies about 25 miles north.

Misratans say, however, that Tawergha’s involvement on Gadhafi’s side went deeper: Many of the village’s residents openly participated in an offensive against Misrata that left more than 1,000 dead and as many missing, they say.

“Look on YouTube and you will see hundreds of Tawerghi men saying, ‘We’re coming to get you, Misrata,’” said Ahmed Sawehli, a psychiatrist in Misrata. “They shot the videos themselves with their cellphones.”

The Tawerghis do not deny that some from the town fought for Gadhafi, but they say they are victims of a pre-existing racism in Libya that has manifested itself violently during the revolution.

The evidence that the rebels’ pursuit of the Tawerghis did not end with the collapse of the Gadhafi regime is visible, both in the emptiness of this village and that of the camps to which the residents fled.

At one, in a Turkish-owned industrial complex in the Salah al Deen neighborhood of southern Tripoli, a man looting metal from the complex simply said that the Tawerghis had “gone to Niger,” the country that borders Libya on the south where some Gadhafi supporters, including the deposed dictator’s son Saadi, have fled.

Abandoned blankets and mattresses littered the area, and laundry still hung drying. Aside from some extinguished cooking fires and piles of trash, there was little else to suggest human habitation.

Lafy Mohammed, whose house is across the road from the complex, said that on Saturday a group of revolutionary militiamen from Misrata, 120 miles east of Tripoli, had come to the camp and evicted its tenants.

“They arrested about 25 of the men,” Mohammed said. “They were shooting in the air and hitting them with their rifle butts.”

“They took the women, old men and children out in trucks,” he said.

Mohammed said that it was not the first time the revolutionaries from Misrata had come after the people in the camp.

“A week ago they were here, but (the people in the neighborhood) begged them to leave them alone,” Mohammed said.

Mohammed said some of the Tawerghis may have been taken to another nearby camp, in a Brazilian-owned industrial complex. On Tuesday, that camp was empty as well, with the gate locked.

Reached by phone at the camp in Janzour, Hassan, who did not want his last name used, said he had escaped from the Brazilian company camp on Saturday, when it, too, was raided. He said about 1,000 Tawerghis were now at the Janzour camp.

“They arrested 35 men, but they let me go because I was with my family,” Hassan said. He blamed a brigade of fighters from Misrata.

In Tawergha, the rebel commander said his men had orders not to allow any of the residents back in. He also said that unexploded ordnance remained in the area, though none was readily apparent.

On the only sign remaining “Tawergha” had been painted over with the words “New Misrata.”

On one wall in Tawergha, graffiti referred to the town’s residents as “abeed,” a slur for blacks.

What is left of the Libyan black people of Tawergha, NATO Crimes In Libya